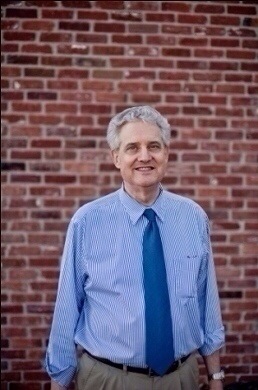 Pastor Bob came to the ministry later in life and in a round-about way. Even though his parents are believers, the teaching he received growing up was five point Arminian and fully pentecostal (use of extraordinary gifts). He came under conviction of sin in his early years and was saved the summer following his senior year in high school. While studying psychology at Long Beach State College in Southern California, he became part of Inter-Varsity Christian Fellowship where he was exposed for the first time to an intellectual approach to Christianity. At this time (1967) there was also still a slightly Reformed emphasis to I-V. He continued his association with I-V at Indiana University where he met his wife, Peggy. He was pursuing a doctorate in Clinical Psychology, and while at IU he went through a philosophical crisis regarding the nature of man as presented in the teaching of behavioristic psychology versus the teaching of Scripture. He came out on the side of Christianity. At the same time, he and Peggy had become disillusioned with the organized church. In 1977, they providentially came under the teaching of the doctrines of grace, five point Calvinism, which was like nothing they had ever heard before. The Lord graciously enabled him to see the truth of the doctrines in the Scriptures. As he had not yet settled on a career, he spent five years working in a Reformed book store which gave him a providential opportunity to explore many areas of the doctrines as well as confronting error and heresy. Having always been studious, he was also able to build a substantial library of biblical helps. Pastor Bob had spent many years teaching Sunday School in various churches, and as he became grounded in the doctrines, the Lord enabled him to begin teaching the truth. In 1987 he completed studies in computer science and found employment in the aerospace industry. That same year their daughter, Elanor, was born. Since 1989 he has been employed on the V-22 Osprey project in Indianapolis. During this time, in 2003 the Lord brought them to Church of the Good Shepherd in Indianapolis. This began as a small Calvinistic Southern Baptist Church but was in the process of becoming reformed. In 2006, he began preaching for the first time along with his work of teaching Sunday School, and he was made a second elder. The founding elder left in 2007 and Pastor Bob stepped into the position of preaching elder (interim pastor). The next year enabled the church to verify his calling as their pastor, which they confirmed by vote in 2008. After a year of considering the necessity of a constitution, the church became Providence Reformed Baptist Church. To God be the glory.

Join us in an exposition of the Apostle Paul's letter to the Colossians.

Join us as we explore Solomon's book of Wisdom.